From 20 years the name of Enada At ’Nikolla is one of the most distinguished celebrities in the fashion in Albania. The well-known former model of the 90’s has created numerous collections ranging from bikinis, to cocktail dresses, night dresses, bride’s gowns and haute couture.

Beginning of At’Nikolla in modeling started as a model when she was still in high school Sami Frashëri”. On 1995 she participated in Miss Albania when she was 18. Enada was very active at that time as a model and was made famous in one of the most important runaways of the time, that of new stylist Eni Velcani on 1996.
Surprisingly the start of At ’Nikolla career wasn’t the modeling, almost a taboo when she was in middle school, she was champion in high jumping, long jumping and 100 meters hurdles. On the other hand one of Enada’s passions was poetry. Enada used to write not only for herself but she would compete students her age in known competitions for the time, and in one of them held in Radio Tirana the only radio before 90’s she would win time over time and be present to read them.
High school would be the time when Enada, the Top Model of the school would become the protagonist of video clips of that time. One of the most successful was “Makina e Memories” sang by songwriter Ardit Gjebrea.
Enada At ‘Nikolla was grown up I Tirana but was born in Korçë, Voskopojë. .
The feature that most characterized at her beginning was rebellion, feature that she showed in dress up, hair style and the way she walked the runaway. As a model At ‘Nikolla was inspired by Naomi Campbell, or the way she moved her head and smiled by Linda Evangelista but she had her own style. This is how she started her career as a stylist. A desire not to fall apart from fashion but to be independent and transform to art her ideas. Her style has always been Enada’s and she has never followed last trends, but has been fanatic to have it her way.
Vetë Enada e përkufizon kështu punën e saj krijuese: Enada herself puts this way her work as a creator:
I like to create! This way I form a parallel world, away from the one I live in! a world that is the way I want it, shapes, colors, dynamic of what I want I have it in me and would want to live it in my everyday life. And of course for the others to see it as well. Every day I am in this creation gear in which I shape my world.

Today Enada At’Nikolla counts tens of runaway shows in Albania and abroad. On 2009 Enada At’Nikolla opened Dubrovnik fashion week.
She has completed three successful calendars with the most distinguished celebrities of Albania. Her creations has been on the pages of fashion magazines such as Vogue Italia.
One of the most successful creations and full of fantasy was the choice of Fashion Party in Lolly Pop in 24 May 2008.
Enada At’Nikolla is married to entrepreneur Agim Zeqo and has 2 children Kendra and Harold. Kendra has inspired her to organize “Kids Fashion Show”, on summer 2012.
On the same year At’Nikolla was the designer of “Miss & Mister Albania” and on the jury she was joined by photographer Fadil Berisha, model Emina Çunmulaj, actor Blerim Destani, and “Miss Albania 1992 Valbona Selimllari. Her collection inspired by Victoria’s Secret had a big impact and her bikinis and hats were highly appreciated.
I am very excited. Enada’s creations added value and it seemed to me as a Victoria’s Secret runaway show would comment later the well-known photographer Fadil Berisha. On the other hand the supermodel Çunmulaj commented “My expectations were multiplied 100 percent”
On January 2013 Enada created the costumes of opera “Ali Pasha Von Janina”, performed in the scene of National Theatre of Opera and Balley. This was a new territory in the art of styling and At ‘Nikolla brought a real presentation and full of fantasy of the period when the events happened.
Every year stylist Enada At’Nikolla introduces new clothes collections, artists, entrepreneurs and celebrities choose her clothes, and singers endorse their song videos to At’Nikolla brand. 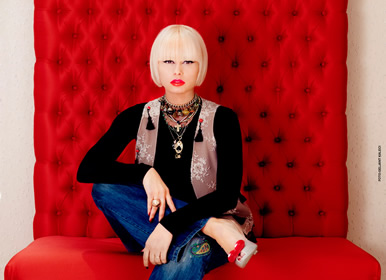